The Scottish Government commits £400,000.00 in response to Tropical Storm Ana

The Scottish Government, in response to the impact of the Tropical Storm Ana, has committed £400,000.00, towards the Emergency Appeal set up by the International Federation of Red Cross and Red Crescent Societies (IFRC). This funding will contribute to a package of support to help hundreds of thousands of people in Malawi who have been displaced because of severe flooding as a result of Tropical Storm Ana.

The Scottish Government has also committed to do proactive communications to help draw attention to the ongoing humanitarian situation from Malawi floods.

In addition, a letter has been issued from Minister for Culture, Europe and International Development to the Scottish Parliament’s Constitution, Europe, External Affairs and Culture Committee:  International development programme: letter from Minister for Culture, Europe and International Development - gov.scot (www.gov.scot) providing a response to the Committee on its recent question to the Scottish Government on how it will continue to support the growth of small grass-roots initiatives in Scotland on international development. Through this letter, the Minister also highlights to the Committee the Scottish Government response and support to Tropical Storm Ana and the flooding in Malawi’s southern province. 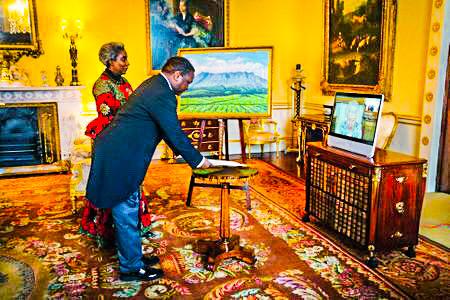 Malawi and UK enjoy very cordial bilateral relations. A number of High-Level visits have been undertaken by both sides. Her Majesty made a State Visit to Malawi from 22nd to 25th July, 1975, which was later followed by a State Visit to the UK by the Late Hastings Kamuzu Banda, First President of the Republic of Malawi, from 16th to 19th April, 1985. Recently, His Excellency the President Dr. Lazarus McCarthy Chakwera, held bilateral talks with the Right Honourable Boris Johnson, Prime Minister of UK, along the sidelines of the Global Education Summit. The Malawi President also made a number of bilateral talks with Senior Officials from the UK Government along the sidelines of the Climate Summit COP-26, which was held in Scotland.

The United Kingdom is committed to partnering with Malawi to boost girl’s education as one way of addressing challenges young females face in society, Her Excellency the First Lady Madame Monica Chakwera has been told.

President Lazarus Chakwera says his administration values every life that its commitment to fight the Covid 19 pandemic is rooted in making sure all Malawians are safe.

Read more: Every life is valuable-Chakwera